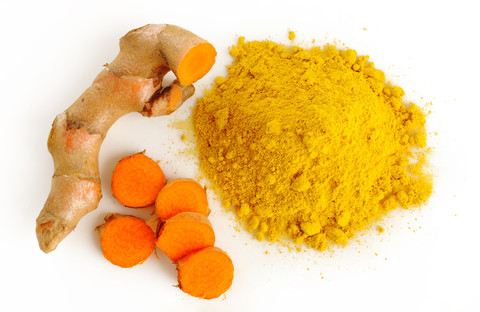 A member of the ginger family, Turmeric is a superfood and a spice which has been shown to have the most amazing healing properties in countless research studies and quite rigorous, placebo-controlled clinical trials. Curcumin is the active ingredient (curcuminoid) extracted from the turmeric plant. And, yes, turmeric is the same spice used in curries! It is the roots of the plants that are used. So, just to be clear â€“ turmeric and curcumin are different things. Turmeric is the yellow powder but curcumin is the active ingredient found within turmeric.

Turmeric has been used for thousands of years by many cultures as a medicinal herb and a traditional food in cooking, particularly in India and the Middle East. Ayurvedic medicine, particularly, has used turmeric to treat a wide range of illnesses from heartburn and gut issues to bronchitis, lung infections, headaches, diabetes, colds and cancer. It is such a fragrant spice! And it is the most beautiful bright yellow colour. It is warming, bitter, and peppery with a mild scent reminiscent of ginger. The pure forms of turmeric powder have very high concentrations of Curcumin. Which is what we want if we are using it in a medicinal sense.

Curcumin has the following properties:

rich in nutrients that support good health including fibre, manganese, potassium, iron, copper and vitamin B6.

Antioxidant rich, supporting the body to increase its own levels of natural antioxidants such as glutathione, confirmed by the results of many research studies.

Infections, swellings, bites and cuts can be treated with turmeric paste

In a recent study undertaken by researchers at the Department of Pharmacology, Government Medical College, Gujarat, India it was shown that curcumin showed potential in anti-depressant activity. The objectives of this trial were to compare the efficacy and safety of curcumin with fluoxetine in patients with major depressive disorder (MDD). Results showed that this study provided the first clinical evidence that curcumin may be used as an effective and safe modality for treatment in patients with MDD without concurrent suicidal ideation or other psychotic disorders. (Sanmukhani, 2014).

If you are interested, PubMed has a raft of interesting studies into the use of turmeric and curcumin.

What happens when you eat too much?

Please log in again. The login page will open in a new tab. After logging in you can close it and return to this page.